Bates College, officially known as the President and Trustees of Bates College or simply as Bates (/beɪts/), is a private liberal arts college in Lewiston, Maine. It is equidistant from the state capital, Augusta, to the north, and the cultural hub Portland to the south. Anchored by the Historic Quad, the campus of Bates totals 813 acres (329 ha) with a small urban campus and 33 off-site Victorian Houses distributed throughout the city. It maintains 600 acres (240 ha) of nature preserve known as the “Bates-Morse Mountain” near Campbell Island and a coastal center on Atkins Bay. With an annual enrollment of approximately 1,800 students, it is the smallest college in its athletic conference. As a result of its small student body, Bates retains selective admit rates and little to no transfer percentages. The nominal cost of attendance is considered very high with tuition frequently among the most expensive in the United States.

Location in the United States

The college was founded on March 16, 1855 by abolitionist statesman Oren Burbank Cheney and textile tycoon Benjamin Bates. Established as the Maine State Seminary, the college became the first coeducational college in New England and went on to confer the first female undergraduate degree in the area. Bates is the third-oldest college in Maine, succeeding Bowdoin and Colby College. It became a vanguard in admitting minority students before the passage of the Emancipation Proclamation. During early 1900s the college began to aggressively expand and by the mid-1940s, amassed large amounts of property, becoming a major economic power in Lewiston. Since the 1950s, the college has acquired and attempted to remedy a reputation for educating the affluent of New England. Improvements to its reputation were diminished after large losses during the 2008 financial crisis increased its tuition costs. The late 2010s saw a redoubled push for socioeconomic, racial, and cultural diversity as well as a major expansion of student financial aid. 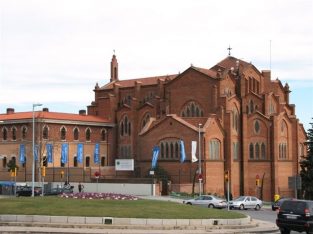 Abat Oliba CEU University (UAO CEU) is a private university located in Barcelona, Spain. It was founded in 1...