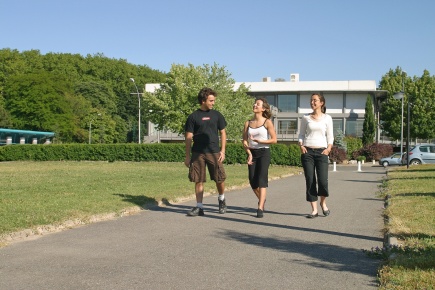 The Institut National des Sciences Appliquées de Toulouse or INSA Toulouse is one of the 210 Grande Ecole d’Ingénieurs, an engineering school, under the authority of the French Ministry of Education and Research. Situated in Toulouse, this school is one of the 6 state engineering institutes that compose the INSA’s network. Created in 1963, it has been a founding member of the University of Toulouse since 2007. Every year, 500 engineers graduate and in 2017, the alumni network is formed by 14,000 engineers. Thanks to the diversity of the specializations, these engineers are now present in all economic sectors. Apart from this degree in Engineering, INSA Toulouse’s missions are to foster continuous training and scientific research. It also offers various master’s degrees and PhD. Diversity and international openness are two values to which INSA Toulouse gives priority: the school is composed of 34% female students, 30% of students are scholarship holders and one out of five students comes from a foreign country.

In 2002, INSA Toulouse decided to reform its structure to adapt to the European 3/5/8 system. The Engineering degree is obtained after five years of studies. The new programme, better adapted to the social and economic environment, includes a one-year common core, two years of pre-specialization and two years of specialization. The selection level at INSA Toulouse has greatly increased since the European reform, and it now makes the INSA Toulouse one of the most elitist universities in France, with an average grade at the Baccalauréat exam (high school achievement exam) of 16,6/20, equivalent to the grades 1.0 or A in Anglo-Saxon countries.