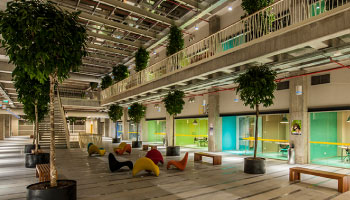 The university was founded by the Hüsnü M. Özyeğin Foundation, and its establishment was approved by Foundation Act No. 5656, published in the Official Gazette No. 26526 on May 18, 2007.Özyeğin University admitted its first class of students to the department of Business Administration and started its education in September, 2008. According to the “Most Popular Universities” survey conducted by Bloomberg Business Week in 2014, Özyeğin ranked 3rd among foundation universities, following Sabancı and Koç universities, respectively. Özyeğin University was also placed 4th among all universities in the online survey conducted with 15.700 students from 89 universities between January and May 2014.Özyeğin University ranked 6th among the Most Entrepreneurial and Innovative Universities of Turkey and rose in the ranking compared to 2013.

Faculty of Architecture and Design