The University of Bridgeport, commonly referred to as UB, is a private, independent, non-sectarian, coeducational National university located in Bridgeport, Connecticut. The university is accredited by the New England Association of Schools and Colleges (NEASC-CIHE).The students of the University of Bridgeport are from 80 countries and 46 states. In 2010, the percentage of students graduating that had participated in an English as a foreign or second language (ESL) program was one of the nation’s highest at 5%.

The university grew rapidly in the 1960s by capitalizing on the increased number of people seeking to attend a U.S. college resulting from the baby boom, Vietnam War veterans eligible for a higher education under the G.I. Bill, and international students who wanted to attend college in the United States. Enrollment peaked at 9100 students in 1969, and an Ed.D. program in Educational Leadership was added in 1979.Enrollment declined in the 1970s and 1980s after the waves of baby boom and Vietnam era veterans eligible for the G.I. Bill declined. By 1990, the university had cut tuition, room and board fees to $18,000 per year, but the school’s reputation had not improved. More than a third of the 50 campus buildings were empty. To cut costs, the university decided to terminate 50 tenured faculty, and asked the other faculty to accept a 30% wage cut. In addition, the university decided to eliminate its Liberal Arts College, alienating many students.This led to the longest faculty strike in the history of American higher education. Dr. Greenwood, the president at the time, quit abruptly, and around 1,000 students left the school, contributing to the cash crisis.

University of Bridgeport is a private institution that was founded in 1927. It has a total undergraduate enrollment of 3,129, its setting is urban, and the campus size is 86 acres. It utilizes a semester-based academic calendar. University of Bridgeport’s ranking in the 2019 edition of Best Colleges is Regional Universities North, Tier 2. Its tuition and fees are $32,850 (2018-19).

The University of Bridgeport is a seaside institution in Connecticut’s largest city. Undergraduates at the University of Bridgeport can choose from a wide range of academic majors, and graduate students have many options as well, including master’s programs in education, engineering and more. Outside the classroom, students can explore more than 50 clubs, including fraternities, sororities and intramural sports.

The university, often shortened to UB, also offers several Division II Purple Knights varsity teams. For one season, the UB basketball team had a secret weapon – the 7-foot-7 Manute Bol, who later joined the NBA and then became an activist for his native country of Sudan. Besides getting involved with athletics, students can spend their time visiting the expansive Beardsley Park and the state’s only zoo. Other nearby off-campus attractions include theaters, museums and shops. UB’s most notable alumni include Fred DeLuca, who co-founded the Subway restaurant franchise

Faculty of Arts and Sciences

School of Public and International 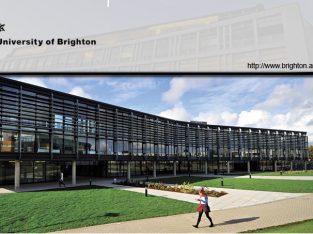 The University of Brighton is a public university based on five campuses in Brighton, Eastbourne and Hastings ...