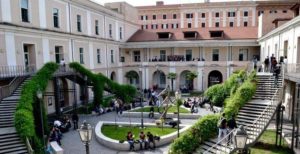 Roma Tre University is a young university thought for young people. Founded in 1992, it has rapidly grown in terms of enrolments as well as in the number of academic courses offered. It has gained a very good reputation in the most prominent academic rankings, especially among the most recently founded institutions. Roma Tre University is organized in 12 departments offering Bachelor’s and Master’s degrees, Postgraduate and Advanced courses, PhDs and Specialisation Schools. A dynamic, modern and international university that has immediately characterised as the vital lever of the capital‘s urban development, within which it is now deeply rooted, contributing in changing the city’s identity with a persevering process of restructuring and re-using abandoned industrial buildings, converting them into factories of knowledge and research.